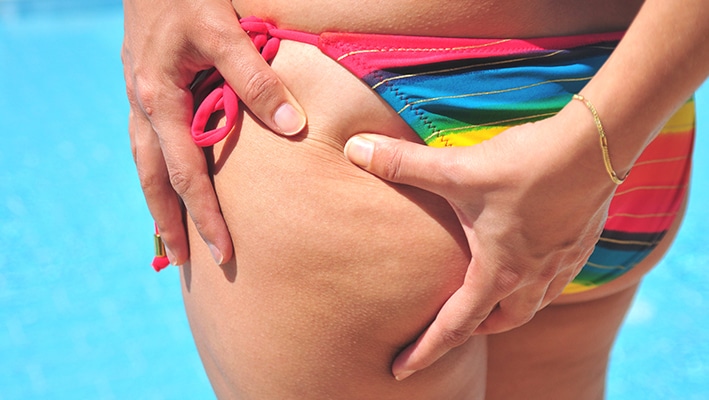 As spring comes around and we shed our winter layers, there’s a chance that cellulite will rear its lumpy little head. Fortunately, it’s not related to any known health issue, so you don’t need to treat it unless you really dislike the way it looks. If that is the case, though, here is what you need to know about cellulite treatments and how they may or may not work.

To understand how cellulite treatments work, you first have to understand cellulite itself. Cellulite has to do with the structure of connective tissue. Beneath the skin, there is a layer of fat and a layer of muscle underneath the fat. As fat cells accumulate, the connective fibres continue to pull the skin tightly against the muscle, which can make the fat push against the skin. The dimply appearance that we refer to as “cellulite” is really just uneven fat pushing against skin.

Both men and women can have cellulite, but it’s much more common in women. Cellulite appears on 80% – 90% of women at some point in their life. It can start as early as adolescence, but it’s most common in women over the age of 25.

There are a few reasons that cellulite seems more common as we get older. As we age, our skin loses collagen and elasticity. This makes the skin a little bit thinner, weaker and saggier, so the fat that presses against the skin shows through more prominently. Weight gain, pregnancy and ageing can lead to the accumulation of fat in certain areas, especially the hips, buttocks and thighs, which means more fat is pressing against the skin and showing through.

Exercise and healthy diet can help to build muscle and reduce fat, but you cannot guarantee where on the body fat will burn off. It’s also not enough to reduce fat on its own because the skin overtop will still be loose and can therefore keep its lumpy, dimpled appearance.

Some topical creams can help reduce the appearance of cellulite over the course of a few months. Creams with Vitamins A and C can help your skin produce collagen, which will strengthen the skin so that the lumpy fat won’t show through as much. There are creams with caffeine which claim to reduce fat, however, there is not as much evidence behind this ingredient and its efficacy.

There are plenty of non-invasive fat reduction treatments, but for cellulite specifically, it’s important to use something that will both reduce fat and strengthen the skin.

TightSculpting is a procedure that uses an ND-Yag laser to essentially target individual fat cells and kill them with heat. Then, a non-ablative ER-Yag laser is used to contract collagen fibres and stimulate collagen production in your skin’s fibroblast cells. Over the weeks following treatment, your body’s immune system naturally removes the dead fat cells while your collagen cells rebuild and reproduce, smoothing out the cellulite.

Ultrasound Fat Reduction and LipoBlast use a similar method, i.e. they both induce targeted heat beneath the skin’s surface to kill fat cells and stimulate collagen, but they do so by using ultrasound technology instead of laser.

Fat freezing technologies such as CoolSculpt are very effective at reducing fat, but they don’t tend to stimulate collagen or smooth cellulite as well as TightSculpt, Ultrasound and LipoBlast do, so fat freezing is usually recommended for a different type of fat pocket.

Once treated, it’s a good idea to keep up a healthy diet and exercise regime to keep the connective tissues healthy and prevent the fat cells from accumulating fat again. Cellulite also correlates with people who have poor circulation, sedentary lifestyles and diets that are high in simple carbs but low in protein and fibre, so get your cellulite treatment now and be ready to grab a healthy lunch bowl and head to the beach for a coastal walk and a swim when summer comes.

Do you want some help with your cellulite?

Come in for a free consultation and assessment to see how we can help you!