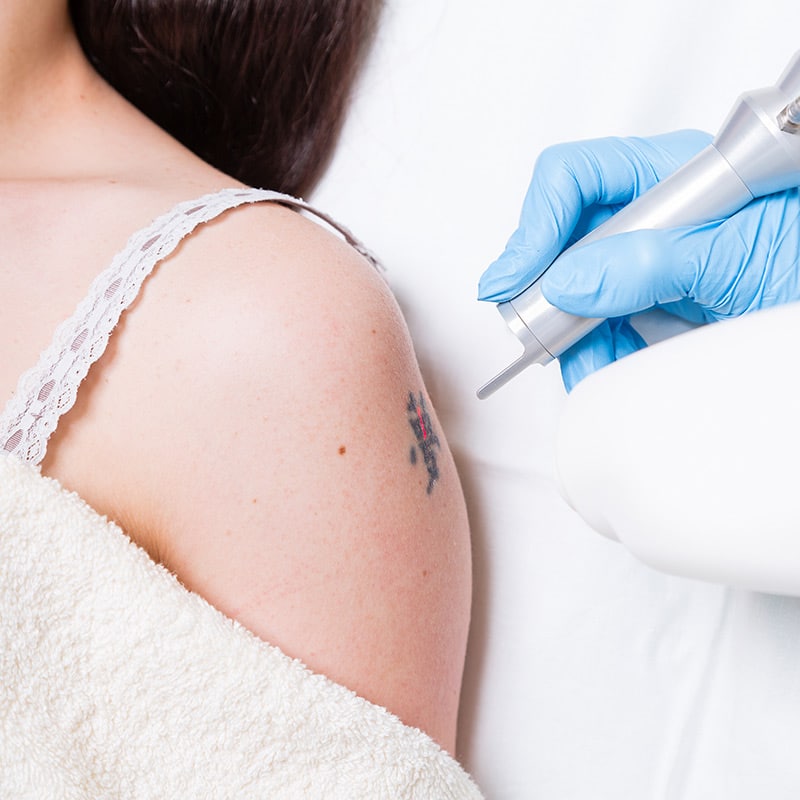 Remember That Tattoo You Wish You Didn’t Get?

Around 22% of Australian men and 29% of women between the ages of 20 -29 have at least one tattoo, and more than a quarter of that group are considering tattoo removal. The most common procedure for tattoo removal is laser, and it’s currently on the rise.

We talk to Abbie McNaughton, one of our experienced clinicians at Rejuvenation Clinics of Australia to find out more about laser tattoo removal.

How does Laser Tattoo Removal work?

The laser uses short bursts of heat to shatter the ink. This passes through the top layers of the skin and are absorbed by the tattoo pigment. The laser blasts the ink and causes the tattoo pigment to break apart into small particles. The macrophage cells then remove the ink after the laser makes the ink particles smaller.

We recommend a minimum of ten sessions, but this can vary from the location of the tattoo, the colour of your tattoo and your skin type. According to a study published by the American Medical Association, around 47% of tattoo removal patients will require up to ten sessions of the Q-Switch laser to be removed successfully. Patients who smoke and had colour tattoos rather than black and red require more than ten sessions for the tattoos to be eradicated.

Who Can Benefit From Laser Tattoo Removal?

As each tattoo is unique, removal techniques must be tailored to suit each individual case. In the past, tattoos could be removed by a wide variety of methods but, in many cases, the scars were more unsightly than the tattoo itself.

Patients with previously treated tattoos may also be candidates for laser therapy. Tattoos that have not been effectively removed by other treatments or through home remedies may respond well to laser therapy providing the prior treatments did not result in excessive scarring.

What Can I Expect During Laser Tattoo Removal?

In general, this is the process for tattoo removal using the newer lasers:

Most patients do not require any anaesthesia. However, depending on the location of the tattoo

and the pain threshold for the patient, the physician may elect to use some form of anaesthesia.

How much does it cost?

Tattoo removal techniques have come a long way since the days of skin grafting and skin removal. At Rejuvenation Clinics of Australia, we use the Q-Switch Laser and set it to a specific wavelength in order to remove the tattoo.

Tattoos made up of black ink only are the easiest to remove. To give you a guideline, you would need to pay $250 for one session in removing a palm size black ink tattoo at Rejuvenation Clinics of Australia. Whereas removing a multi-coloured tattoo of the same size is $400. “It pays to think ahead”, says Abbie. “Thicker and bolder inks take much longer to remove than those with fine lines.” As a result, do not underestimate the amount of treatments required to remove those regrettable tattoos.

Can I use a DIY tattoo removal cream, instead of going under the laser?

As tempting as it is to purchase a DIY tattoo removal cream due to the cost and commitment of the Q-Switch laser treatment, we strongly advise against it.  Such products are often advertised on international websites, which means they can be purchased without passing through the Therapeutic Goods Administration regulation.

It’s more accurate to call these creams tattoo-fading treatments, as they can only lighten a tattoo at best. However, be weary of products that contain ingredients such as trichloroacetic acid – as the ingredient can either burn the skin, or pose skin cancer risks. As Abbie puts it, “If you’re interested in tattoo removal, don’t attempt this by yourself.”

If you’ve got any tattoos you regret and want them removed, or you’d like to ask Abbie any further questions about tattoo removal, please feel free to drop by, or call to make an appointment on 1300 88 99 35.