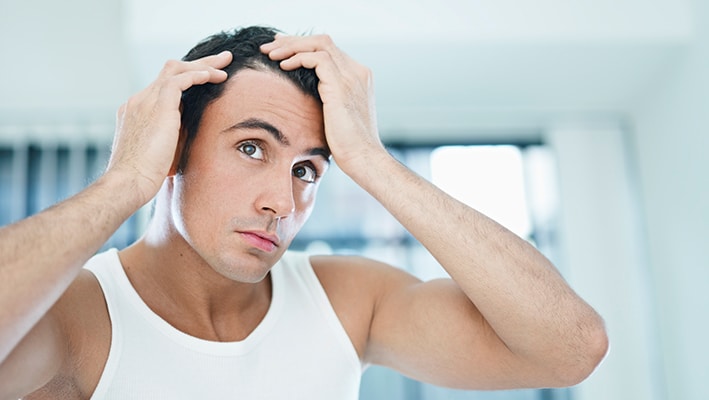 Male Pattern Baldness: Is It All In The Genes?

Does your family have a history of Male Pattern Baldness (MPB)? This particular tendency for hair loss is hereditary, but you are probably not expecting what follows: it is handed down not by your father, but by your mother.

The condition often starts in men’s early 30s and, in time; it leads to permanent baldness. The chance of a man getting MPB increases with age; by the time you are 55, the probability of experiencing some hair loss reaches 50%.

Recent studies led by Markus Nöthen, a genomics professor at the University of Bonn in Germany, established that, although the gene variation responsible for MPB is related to the male sex hormones, the condition is associated with the X chromosome, which is handed down by the mother.

Researchers found that the hair follicles in men affected by MPB seem to be more susceptible to the toxic effects of testosterone and dihydrotestosterone (DHT) as men age. This predisposition allows DHT to limit the growth of hair on the scalp.

Although hereditary predisposition is the main cause for MPB, there are other possible causes for hair loss:

Being aware of the genetic facts about MPB can help you prepare for what awaits. If a man investigates the tendencies in his family, he might be able to establish his chances of experiencing hair loss problems later in life.

Although MPB is associated with genes passed on by a man’s mother, the genes coming from the father can also influence baldness. Therefore, any hair loss investigation should involve a study of both sides of the family – the mother’s and the father’s.

To find out the likeliness of becoming bald, ask yourself questions such as:

Answering these questions, you can predict your hair loss future.

The X chromosome is the one containing the gene responsible for Male Pattern Baldness. The gene comes in the form of an androgen receptor (AR) and triggers MPB.

In order to pass this gene, the female needs to have the AR attached to both of her X chromosomes. Otherwise, she would pass on the dominant gene, which prevents MPB.

The above indicates that Male Pattern Baldness is inherited from mothers. However, if a man wants to track his hair loss history, he should also investigate his father’s family’s tendencies because they increase the general risk of MPB.

I have Male Pattern Baldness. What can I do about it?

The awareness of the role of genetics in MPB is especially helpful, as it allows men to take action against baldness. If initiated early enough, treatment against hair loss can prove very effective.

At Rejuvenation Clinics of Australia, we recommend a therapy called Platelet Rich Plasma (PRP), which involves injecting growth factors into your scalp. PRP for Hair Loss is a powerful and natural hair loss treatment that does not require repetitive daily chemical applications or expensive surgical procedures. The growth factors have the power to regenerate and repair damaged hair follicles and the new hair growing from those follicles will be stronger.

However, for PRP to be effective, the hair follicles should not be completely destroyed, which can happen if hair loss is ignored for too long.

The entire regeneration process usually involves six treatments, with a month apart between each treatment. Injecting the growth factors requires no real downtime, so you can go on with your daily responsibilities after the treatment, without any major inconveniences.

The PRP therapy requires utmost precision; only a doctor that has great experience and expertise in performing the treatment should perform the treatment.

Have you noticed that your hair is starting to fall uncontrollably? Do not wait until it is too late. Call our clinic now and schedule an appointment with a PRP therapy expert.

For a long time, laser treatments have been used on the face, neck and décolletage to produce collagen and tighten the skin. By using a...

Who says you need plastic surgery to freeze the hands of time? Injectable cosmetic treatments can help you regain your youthful appearance with no downtime.