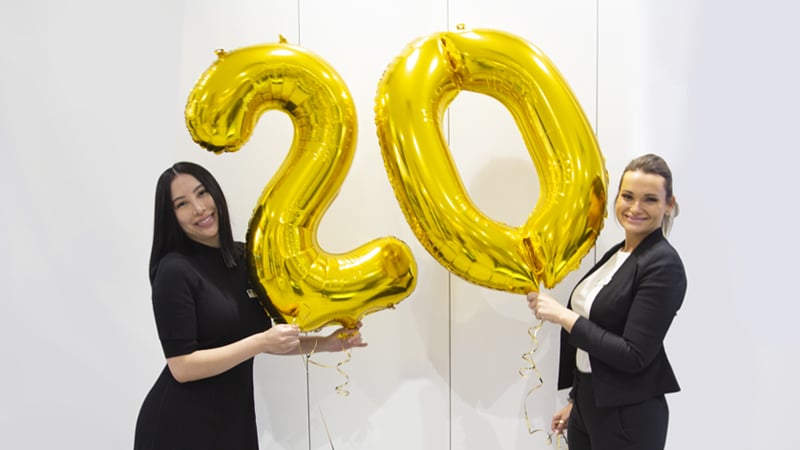 When the opportunity came to tell our company story for our 20-year anniversary, we asked our founders, Dr Garry Cussell and his wife Nurse Robyn Cussell, to talk about the development of cosmetic lasers in Australia and where we fell into it. We found a tale of a family business taking a chance by pioneering the spread of a new technological enterprise by bringing the new IPL machines to beauty salons around Sydney.

Dr Garry Cussell and his wife Nurse Robyn Cussell, were among the earlier practitioners to purchase an IPL (intense pulsed light) machine in Australia. Over the 20 years since, they have continued to pioneer the clinical use of most advances developing in laser technology for skin rejuvenation.

Dr Cussell was an experienced GP with a busy practice, and his transition into cosmetic medicine began initially with offering services across Sydney in various beauty salons as well as in his own general practice, and at the same time offering anti-wrinkle injections and dermal fillers.

“IPL technology was new and exciting,” Nurse Robyn tells us. They arranged special guest days at beauty salons and cosmetic clinics across Sydney, and the dates booked up. It was all word of mouth since there were no mobile phones and no social media, but people couldn’t wait to try these new non-invasive treatments that could rid them of body hair and treat their skin concerns, blemishes and acne non-invasively.

Hair removal was just beginning to become popular and starting to replace traditional waxing. “We were so busy, we didn’t think there could be any hair left in the world!” Nurse Robyn laughs, but then facial peels and other treatments followed.

IPL, being a flash lamp, was somewhat limited with many skin conditions, but newly developing laser technology quickly began to fill the gap in treating more widespread and individual skin concerns.

“It was an exciting time because we could see the coming development of advancing laser technology being used to treat other skin concerns. We were really standing on the tip of the iceberg,” Nurse Robyn says of the evolving cosmetic industry that soon issued a new wave of development in other light-based technologies that used specifically targeted “laser” light for more individual concerns such as ageing, pigmentation and redness.

The next big advance in the ability to treat skin rejuvenation more effectively, without resorting to ablative lasers, came with the development of fractional Lasers in 2002. Again, Dr Garry and Nurse Robyn Cussell were amongst the first two clinics in Australia who bought these new Fraxel Lasers.

“We had to apply a bright blue dye over the face for the laser heads to be able to track accurately across the skin. For the first time, we were able to penetrate deeply into the skin with only a little down time afterwards, but then it was rather difficult to remove the blue die after the treatment,” Dr Garry says, “The technology has come a long way since, and again we were always among the first and early adopters of most of this new technology that came out of America mainly but also parts of Europe.”

Around the time that laser technology was developing, a brand-new injectable treatment appeared on the cosmetic market that would later become a multibillion-dollar industry.

“Our interest in injectable treatments was inspired in 1998 by a close family friend who was also a classmate of mine in undergraduate medicine at Sydney University, who had settled in Vancouver Canada as an Ophthalmologist,” Dr Garry recalls, “he told us of the developing popularity of using an injectable toxin [previously used to treat ocular spasms] to treat wrinkles, as had first been trialled by his fellow ophthalmologist in Vancouver, Dr Jean Carruthers, in the 1980s. It’s now part of a multibillion-dollar industry worldwide, but in the early 2000’s hardly anyone had heard of it.”

As with laser, the Cussells were some of the earlier practitioners to perform anti-wrinkle injections in Australia, though they didn’t take off as quickly, Nurse Robyn recalls, “it was so new, so there was a little bit of fear in the general public about what was being injected, even though it had been used for medical purposes for a long time. It took a lot of reassuring.”

The new cosmetic industry was rapidly becoming much more scientific and mature with many new developments, including injectable dermal fillers made from better materials and the advancement in cosmeceutical ingredients in skincare.

“We have put a great deal of effort into developing a truly advanced medical grade skincare range, over the last five years,” Dr Garry says, “the resulting SkinFit and RejuvAus ranges are truly unique in their comprehensive range of synergistic medical grade multiple actives combined in pure concentrated serums without the normal occlusive synthetic fillers that are found in most other ranges of available skincare.”

The Cussell’s first non-invasive cosmetic clinic opened in the year 2000. As the laser technology continued to evolve, more new applications were found to be successfully treated with greater safety.

We were also amongst the first uses of the radio-frequency skin tightening machines such as Thermage and then the newer technology using deep ultrasound skin tightning machines. Then came the advent of non-invasive body sculpting and body contouring machines using fat freezing, laser or ultrasound fat lipolysis machines as well as developing a specialised micro cannula liposculpture surgical service. We then again pioneered in Australia the development and research into laser treatment for snoring and obstructive sleep apnoea and gynaecological lasers for treatment of post-menopausal vaginal dryness, urinary stress incontinence and laxity.

As our practice became more and more diverse and comprehensive in its range of treatment services offered, we found ourselves very much consumed with continual and ongoing training of staff with these increasingly sophisticated machines and technological development.

Our philosophy had always been to provide a thoroughly comprehensive range of the latest medical grade treatment options to be tailored to an individual’s requirements and to deliver these with a higher level of excellent customer service. To be able to do this, our organisation expanded into over 50 staff with more than half of these providing supportive administrative and customer service duties to ensure our level of excellence.

“Goodbye to the family practice to make way for the necessary corporate efficiency,” says Nurse Robyn. Although, we like to think of our staff as being part of our “bigger family” and try to run our clinics that way.

Yeliz, who was one of our first junior receptionists, is now one of our most valued Senior Clinicians.

“I was just so interested in everything they were doing with laser,” Yeliz remembers, “I wanted to get involved.” The Cussells helped Yeliz through Beauty School while she worked full time and received plenty of training from them. “They were the best trainers, really hands-on and they helped a lot.”

Along with our 20th anniversary, this month also marks the 8-year anniversary of a familiar face in our clinic; Manager of Clinical Operations, Ann-Marie. She started out as a make-up artist working with Margarita in the skincare product retail area of the business, but she begged Dr Garry to become a Clinician. “I even started wearing a Clinician’s uniform to work so that he would see me as a potential Clinician,” Ann-Marie recalls.

She began her training with Dr Garry and Nurse Robyn Cussells’ daughter, Sally Cussell, a Clinician who is now a Cosmetic Nurse and close friend to Ann-Marie.

“I was afraid of Sally at first!” Ann-Marie laughs, “because she was so impressive.” Ann-Marie took the task of prepping Sally’s clients for treatment by cleansing their skin. Oftentimes, Sally would give encouragement, but occasionally she would come out with a “hey, you didn’t cleanse her properly.”

It’s a perfect example of the family business experience. Your team supports you and wants to see you grow as a member of the family, but you also receive the blunt honesty that is normally only reserved for family as well.

The clients are a part of this, too. In her early days, Ann-Marie held weekly makeup classes at the clinic and recommended treatments to some of the attendees. “Some of them are still my clients today,” she tells me with pride.

Christabel on the front desk remembers most of our clients by face and name. Even while we were interviewing Nurse Robyn for this piece, a lady walked in to ask about the grandchildren and joke about the rosacea that returned to one side of her neck, before heading down the hall with Maria like two teammates playing for perfect skin.

Some of Ann-Marie and Yeliz’s fondest memories were watching the business grow from one location with five Clinicians to three locations with a wider team of Clinicians, Nurses and Doctors, plus the support team of administrative staff.

At some stage all of the Cussells’ four children have been involved in the business and to this day remain active in some way or other. We have had a very loyal staff, many of whom have been with us for many years.

Dr Garry and Nurse Robyn’s assessment of the last twenty years overall is that the technology has just become incredible, injectables are more popular than ever, people have fewer surgeries thanks to non-invasive skin tightening, and in spite of the challenges and milestones for the Rejuvenation Clinics of Australia family, the time just flew by, as it tends to do when you’re actively involved in work, getting satisfaction from it and enjoying the rich experiences of long term client and patient relationships.

Want to celebrate with us?

Enjoy 20% off all laser resurfacing treatments, because rejuvenating your skin is what we love to do most!

Parking Promotion: Take The Cost Of Parking Off Your Treatment!

To alleviate travel concerns we will credit you for the cost of your first hour of parking when visiting our clinics.

Our doctor-led clinics are provisioned to provide a clean & hygienic environment. We continue to maintain many of our safety initiatives.