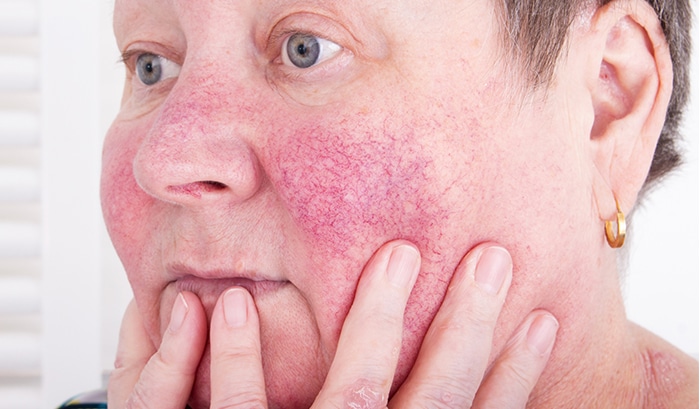 The Truth About Rosacea: Why It’s So Hard To Treat

The seasons are changing, and for some of us, that means rosacea flareups. It’s important to take care of rosacea-prone skin because repeated ongoing flare-ups can eventually lead to permanent redness, and in some cases, growths of thickened skin, especially on the nose. The trouble is that there is so much conflicting information on rosacea in particular. We spoke to two of our Dermal Clinicians to find out why that is and what you can do about it.

“Treating rosacea can be difficult because every case is so different,” says Senior Clinician Kirsten Tiplady. During a flareup, she explains, symptoms can vary greatly between people, so you may have any one (or more) of the following symptoms;

You may read on one website that Vitamin B3 (Niacinamide) can help soothe rosacea, while other experts will advise against going anywhere near it during a flareup. This is because Vitamin B may be soothing for some people with rosacea but irritating for others. “You really have to treat each person differently,” says Kirsten.

Essentially, rosacea is an inflammatory condition, so caring for it means bringing the inflammation down in a way that works for your skin. Kirsten advises that you should keep your skincare simple during a flareup. Use a gentle cleanser and a soothing moisturiser, and don’t exfoliate too often. Products with aloe vera can be soothing, but you have to be careful as some aloe gels you purchase at the pharmacy contain potentially inflammatory ingredients like alcohol.

Serums that contain Vitamin C, Vitamin E, Aloe or Sea Buckthorn can soothe rosacea for some people and help bring down redness. For others, any vitamins can contribute to a flare-up, so proceed with caution. You can also speak to a Dermal Clinician as they see plenty of cases of rosacea and will have an idea of what to look for when assessing flare-ups and making recommendations.

We may recommend a serum, but it depends on your skin. Products that help some of our rosacea patients include RejuvAus Mild Exfoliating Gel Cleanser or RejuvAus Super B Brightening & Hydration Serum, which has soothing Vitamin B5 (Panthenol) but these can vary depending on the nature of your symptoms.

You may need to avoid products with AHAs, such as glycolic acid, citrus acid or lactic acid. AHAs are a type of chemical exfoliator, and they’re highly recommended for most skin types, but during a rosacea flare-up, they may just exacerbate that burning sensation. That being said, however, some rosacea patients benefit from a lactic acid facial, which just illustrates how difficult it can be to offer general advice.

Professional treatments will vary between patients as well. “If a client comes in and their skin is very red and angry, or broken out, we’ll usually start them with PhotoTherapy to bring down inflammation and to calm and strengthen the skin,” explains Senior Clinician Rachael Drummond, “for skin that is very flushed but non-inflamed, we can often treat it with Deep Rejuvenation treatments. Then for some patients, a peel can be beneficial, but it really depends on their symptoms.”

Rosacea has also been linked to gut health, which is known to influence inflammation elsewhere in the body. Rachael and Kirsten often discuss diet and probiotics with their patients. Foods with omega-3 fatty acids can help reduce inflammation in the body, including flaxseeds, salmon or anything rich in zinc (such as pumpkin seeds or kale).

Many of us are familiar with probiotic foods (such as yogurt, sauerkraut and kombucha) but we’re also now realising the importance of prebiotics for your skin. Prebiotics are non-soluble fibres that act as food for the healthy bacterial cultures in your gut. You can get them from bananas, leeks, asparagus, kale, lentils and whole grains like oats and barley.

Foods to avoid might include sugar, white flour, processed meats, and for up to half the population of people with rosacea, alcohol.

The most important thing to remember is that you’re unique, so you need to figure out what works for you. The National Rosacea society has a rosacea diary that can be helpful for finding your triggers, and you can always book a complimentary consultation with one of our expert Clinicians, too.

Would you like to reduce your redness and rosacea?

Come in for a complimentary, obligation free consultation with one of our expert Clinicians

How To Look Your Best On Zoom

Many of us are working from home longer than expected, so we put together expert lighting and skincare tips for looking your best on Zoom.