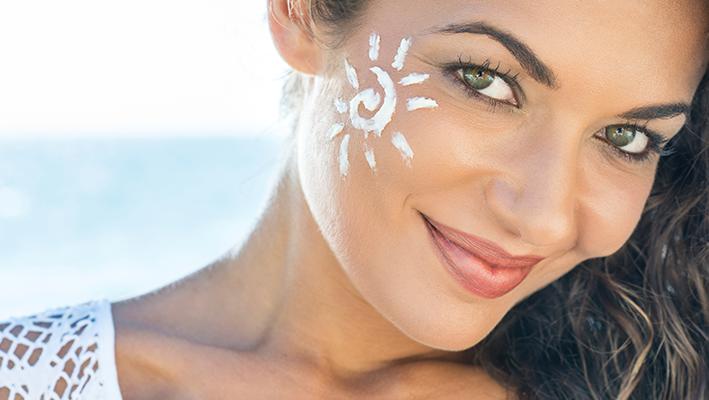 The most important product anyone can put on their skin in Australia is sunscreen. The reason for this is that the ambient ultra violet bright light is so much stronger in Australia than in most other places in the world, particularly so the Northern hemisphere. As proof this many people who come from the Northern hemisphere after living in Australia for several years become significantly sun damaged and pigmented because they’re not used to using sunscreen regularly.

The last and most important aspect of protection against this invisible ultraviolet radiation is the fact that most sunscreens that people use aren’t fully effective after two hours. Many people think they are doing the correct thing by putting sunscreen on every morning but are unaware that it is ineffective after two hours which is when the strongest ultraviolet light radiation actually becomes stronger during middle of the morning, at lunch and in the afternoon. Many people pay lip service to sunscreen by assuming that the so-called protection in their make-up is effective enough against ultraviolet radiation. Mostly this is only 15+ and we need at least 30+ UV protection but the main issue is that the effectiveness of the sun screen is gone within two hours.

As a first recommendation for all skincare in our clinic we always recommend the use of  sunscreen. We have found two sunscreens that are more effective than all the others, principally because not only are they 50+ and 55+ UV protection but they are certified to last 8 hours on the skin eight hours on the skin. This is the most compelling reason for everyone both male after they have shaved in the morning or before they go to work and female similarly before they put their make up on in the morning to purchase and apply one of these sunscreens. No other single skin skincare product is more important on the skin to prevent damage and ageing to the surface complexion than a sunscreen.

These products are cheap, roughly $50 and used judiciously should last up to a year for each person. They are also good moisturisers so there is no need to use a second moisturiser in the morning. Secondly pigmentation issues and many aspects of the environment as well as the sun contribute to discolouration of our face with brown spots ranging from some damage to freckles to individual brown spots which can be flat underneath the skin or raised from the skin. Sunscreen is obviously the number one protection to prevent these occurring and to prevent them from spreading and enlarging and getting worse.

Secondly the use of pigment inhibitors is extremely important. Pigment inhibitors work on the deeper aspect at the base of the first layer of the skin where the pigment cells are active every day producing new pigment. These pigment or melanin cells have two main sources of activating and stimulating them to produce more pigment. Firstly of course ultraviolet radiation but secondly because pigment production is a chemical reaction within those pigment cells (melanin cells), chemical reactions require certain ingredients, one of which are a series of enzymes. We are able to reduce the amount of new pigment produced by blocking these enzymes and this is the action of all of the pigment inhibitors available on the market today.

Over the counter preparations from various chemist and department stores can be harmful and dangerous, especially if they contain hydroquinone or a derivative of hydroquinone that is converted into hydroquinone within the skin. Many of these products in higher concentrations have been banned from over the counter sales throughout the world because they carry the risk of causing worse pigmentation. This is because they can cause rebound hyper or increased pigmentation once the product has stopped. Or if used for prolonged periods of time can also stimulate more pigment production in the long-term.

There are however many good enzymes blocking pigment inhibitors on the market that are not hydroquinone derivatives that are safe to use long-term. Our clinic stocks many different varieties of cosmeceutical high-grade products that we have selected because of their advantageous properties. As discussed before this is because they are well manufactured, pure and are not full off preservatives or fillers that often cause reactions in the skin. Every one of these product ranges includes these enzyme blocking pigment inhibitors. Two or three of these Ranges have superior enzyme blockers and these are the ones we will recommend within the clinic.

What’s The Difference Between Melasma and Hyperpigmentation?

Inflammation is brought on by heat burns, acne or sun-induced skin conditions. Inflammation stimulates your melanocytes, which produce melanin. Melanin can become trapped, resulting in...

Rejuvenation Clinics of Australia offer a meticulous selection of cosmeceutical skincare products that are leaders in the industry available in-store and online.