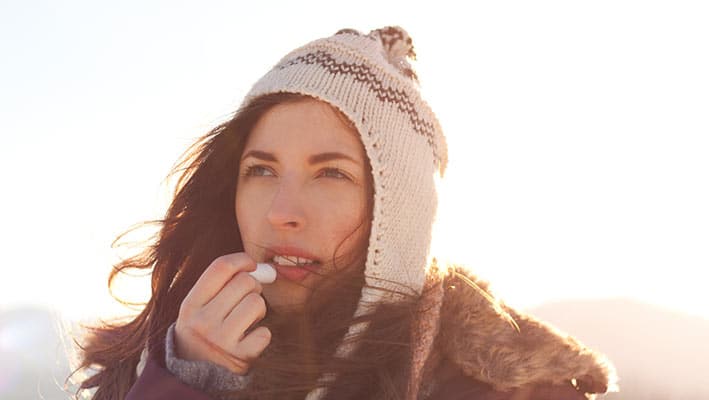 What Skin Conditions Are Prevalent During Winter?

Winter, although a cosy time of the year where you can snuggle up wit a nice mug of mulled wine, can also be a time where your skin can play havoc. Your once clear skin now looking flushed and dehydrated. At Rejuvenation Clinics of Australia, we will run through the causes, symptoms and treatments of some of the most common skin complaints during the winter.

Eczema is a form of dermatitis, where the skin’s outer layers is inflamed, resulting in rashes. The skin can exhibit dryness, redness, swelling, crusting and flaking. These symptoms can cause itchiness and bleeding, which could lead to scarring.

There is no known cause for eczema, but some researchers have speculated that limited exposure to pathogens as a child could lead to a higher susceptibility to eczema. Others suspect eczema is triggered by an allergic reaction to dust mites and coeliac disease. A study that was published by the Journal of Investigative Dermatology Symposium Proceedings have shown that those with eczema have less genes called filaggrin in their DNA make up. Filaggrin is important for the formation of the skin barrier; normally every cell in the skin has two copies of this gene. With those susceptible to filaggrin, they have only one copy of this gene. So when the person’s skin is exposed to irritants, the skin’s natural moisture is slowly reduced, resulting in dry and flaky skin.

With no known exact cause, eczema cannot be cured. There are certain skincare products such as the ones from Ultraceuticals and Dermaviduals, as well as Phototherapy Light treatment that may alleviate the symptoms of eczema.

Keratosis pilaris (also known as ‘KP’) is a common skin condition, which causes rough patches and small acne-like bumps. They can occur on the face or body, but are usually found on the arms, thigh, cheeks and buttocks. The bumps are usually white, sometimes red but they do not hurt. It is difficult to treat keratosis pilaris, laser treatments such as Erbium Laser, Phototherapy Light and peels which contain AHA being the best ways to improve the appearance of keratosis pilaris.

Psoriasis is another inflammatory skin condition and symptoms include red scaly patches on the skin and flaking of the skin. Around 10% of the Australian population have all three symptoms. Environmental factors that trigger psoriasis include:

There is no specific cure for psoriasis, but it can be well-controlled with treatment. Skincare treatment we would consider at Rejuvenation Clinics of Australia include moisturisers and Vitamin B products. Similar to the treatment of eczema, we recommend a Phototherapy Light treatment to calm down the inflamed areas of the skin.

Signs such as redness, pimples and flushing may be a sign you have rosacea. Rosacea is a vascular disorder, which flares up in response to various triggers such as alcohol, sun exposure, spicy foods and certain cosmetics. Many people who get rosacea have family members who also have the condition.

The best way to treat rosacea is through skincare products with anti-inflammatory ingredients such as aloe vera, provitamin B5, green tea, red algae and zinc to name a few. Skincare with AHA  and Vitamin A can also be used to reduce inflammation and eradicate the pustules that can sometimes arise with rosacea.

There are some cosmetic procedures such as the M22 IPL and laser treatments such as Laser Genesis that can relieve redness and flushing. The laser targets the capillaries in the dermis, thus destroying the tiny blood vessels and reduces the flushing.

If you’re concerned with any skin conditions we’ve mentioned in this article, book in for a complimentary, obligation-free consultation at Rejuvenation Clinics of Australia and see which treatments are suitable for you.

Acne and Gut Health: What to Eat for Clear Skin

The link between gut health and clear skin was only recently been verified by modern empirical research, and even more recently accepted by the medical...

The Truth About Rosacea: Why It’s So Hard To Treat

There is so much conflicting information about rosacea and how to look after it. Our Dermal Clinicians weigh in on why that is and what...

What You Can Do About Red Sensitive Skin

Red, sensitive or inflammed skin can happen to people with all skin types. Here's why it often occurs and what you can do about it.